Some laws that are passed by the State or Federal government require more specific regulations to make them effective.  The agencies that oversee the laws propose these regulations.  These proposed regulations, whether State or Federal, are published publicly, and the public has an opportunity to review them and comment on whether or not they believe the proposed regulation should be enacted.  It is very important to note that anyone can comment. Making comments is not just for lobbyists, organizations, or businesses, but for ordinary citizens. This process is open to all because these rules and regulations will affect us all and some of them will have an immediate effect on people’s lives. Two proposed bills in the comment period that you might be interested in:   Three ways to be engaged in the legislative and rule-making process:  Regardless of which option you choose, your participation is most important.  It is what makes us a true democracy.  You can find details about the process for public commenting public comment process below or here.  Questions?  Ask us at sd53communications@gmail.com and we'll get back to you and also incorporate answers into an upcoming blog post.   --Patricia Parez-Jenkins, Issues, and Programs Director, SD53


Your Views Are Important. Your comments let the agency know what you support, what you oppose, and any improvements you'd like to make to proposed rule language. Timing Matters. In most cases, you have one, and sometimes two, opportunities to make comments:
The number of days are different in each case, and are identified in each rulemaking discussion topic in the "Discussions" link at the top of the page. Be Prepared. Review the proposed rules, applicable public notices, the agency's Statement of Need and Reasonableness explaining its views on the proposed rules, related exhibits, and the filed comments of others to inform your views.  Be Clear. Your comments should:
Important:  All comments will be made available to the public. Please only submit information that you wish to make available publicly. The Office of Administrative Hearings does not edit or delete submissions that include personal information. We reserve the right to remove any comments we deem offensive, intimidating, belligerent, harassing, bullying, or that contain any other inappropriate or aggressive behavior without prior notification.

February 13, 2021
For discussion today are the bills related to elections. There are quite a few that are being proposed. One example is SF173:  Election voter registration photo ID requirement; voter identification care creation; provisional ballots establishment; appropriation. If you go here you can see the history of the bill and where it has been discussed in committee.   The Senate bill has a House companion bill, HF 293 Obviously this bill is going to affect voters who are disenfranchised, the elderly, young students, the homeless, and many others who are not able to get a photo ID. The Bill in the Senate has been referred to the finance committee. You can see the report in the Senate daily journal.  The companion bill HF293 has not moved nearly as far in the committees. These are bills to watch and to discuss with your elected officials. Another one of concern would make the ballots cast by those who register on the same day that they vote as provisional ballots. This one does not have a companion bill but it is indicative of where Republicans want to go with voting rights. Republicans are working at making it difficult to vote in Minnesota. The hope is that our democratic legislators and governor can for the moment stem the tide of these laws. However, it is important to note that they will try again and again in small and large ways to chip at the rights of voters. There are also numerous bills presented by Democrats to make voting easier. These senators need to hear from us as well to let them know we approve of making voting easier and more accessible to a wider population.   Those bills can be found in the Senate digest of popular bills. They are grouped by topic. Feel free to look them over, click on them, see where they are at and where they are going and if you wish to testify, check out the committee schedule so that you can provide testimony when these bills are presented.   --Patricia Parez-Jenkins, Issues, and Programs Director, SD53

January 6, 2021 a day on which the final procedural work of government for the people of the United States to usher in a new president, was also a day that will be remembered as a dark day of sedition, insurrection and an attempt to overthrow that very process of peaceful transfer of power. This act of domestic terrorism was actively encouraged by a sitting president of the United States and supported by a number of officials. We work for democracy together, as Democrats and Republicans and we see our party platforms as the axis around which the United States government works as a democratic republic. We have all been dishonored by the political encouragement of domestic terrorism.  At SD53 and the Big Tent Party, we are emerging stronger and even more committed to battling the destructive influence of misinformation, hate, division and aggression. Democracy is fragile, needs our work and the participation of all our communities. We will not stop in this work. As we begin a new year, amazing things are happening as the representation of our diversity is increasing and is now unstoppable. Join us, add your voice, work with us to build trust and heal as 2021 brings clarity and promise. 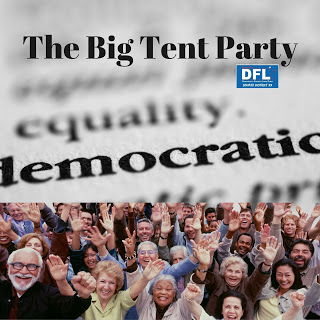 November 26, 2020
We are going to be heading into a period where politics makes sense. However, as citizens, this does not end our obligations and responsibilities to watch and monitor. Nor does it take away our responsibility to hold our government accountable. As we speak, the current administration is trying to do all sorts of last-minute actions to put in peril the transition; the Biden administration's ability to act humanely and timely, and put barriers and blocks to protect many. We are still needed. I will attempt to try to give information about various topics in future posts. I am mostly involved with the agencies related to immigration, as that is what I practice.   However, there is a myriad of topics and issues that are pending. I will try to provide information and links so that those interested can become better informed. First of all, this is the link to all the agencies within the federal government:  https://www.loc.gov/rr/news/fedgov.html, Secondly, in terms of immigration and advocacy, the Catholic Legal Immigration Network is a great resource. While this is a religious-based organization, it is a very active advocacy group whose information is available to the public. They do a lot of good work. There are issues that they do not touch upon, and if they come up, I will look for another organization to showcase. However, this organization has a PDF on helping immigrants by being involved in the Federal Rulemaking process. Currently, many regulations are being proposed in these last few months that will be harmful to immigrants. The link below will help anyone learn how to support immigrants by speaking out against regulations that will harm them. https://cliniclegal.org/resources/federal-administrative-advocacy/defend-immigrants-taking-part-federal-rulemaking-process --Patricia Parez-Jenkins, Issues, and Programs Director, SD53

Senate District 53 Stands in Solidarity with Justice for George Floyd

We stand in solidarity and support for the peaceful protests our communities are engaging in as a response to the senseless and brutal killing of George Floyd.   Even as we struggle to articulate our grief, we acknowledge the on-going reality of fear, violence, and unequal treatment under the law suffered by people of color in our country.  We see the deep wounds and the injustices that continue to make this a reality for too many, for too long.  It should be a matter of shame that the Twin Cities has some of the worst racial inequalities in income, healthcare, education, and housing in the USA.  This abysmal, and widening, the inequality gap cannot continue.  We will not be silent.

We are all part of this pain and the anger, but we pledge also to be part of the solution.  As the ‘Big Tent’ party, we see the strength and richness that diversity brings; we want to welcome those who have felt there is no place for them in this conversation because the conversation is incomplete without you.  We believe we can do so much more with empathy and understanding. In these hours of sadness, we also see the power of communities coming together and speaking up for justice and the kindness of common Americans from every walk of life. In this, we see hope for the way forward.  We believe the strength of our shared humanity is greater than the forces that seek to destroy, oppress, and divide.  Let us begin and let us never be silent.